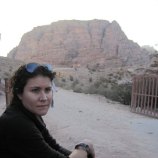 Julie Gamble is a doctoral candidate in the department of city and regional planning at the University of California, Berkeley.  Her dissertation project looks at the intersections of urban mobility, citizen participation and transportation planning in Quito, Ecuador.

The (Re)turn to the Underground Metro: Rationalizing Quito’s Metro Rail

One of the many critical tools in transportation planning is adapting best practices from successful models worldwide. The production of knowledge behind transportation solutions has evolved from a local governmental practice to include international actors, think tanks, trusted peer networks, and non-governmental actors that spans across the North America and Europe (Marsden et al 2012). This can also be referred to as policy mobilities which travel in the global north and south (McCann and Ward 2011; Peck and Theodore, 2010). Latin America is perhaps the birthplace of innovative and low-cost transportation solutions.  Bus Rapid Transit (BRT) originated in Curitiba under the guidance of Jaime Lerner and a team of local and international experts and is the cradle of BRT solutions (Lindau et al 2010). Though, what it is most importantly also famed for is connecting land-use planning with public transportation solutions (Fouracre, 1975; Cervero, 1998). This model then quickly reproduced itself in Quito’s Trole Bus system (Embarq 2010) and in Bogotá’s Transmilenio (Ardila-Gomez 2004), and later to many other cities in Latin American and around the world.

Despite the successful implementation of BRT systems, many Latin American cities are returning to costly transportation solutions with lengthy construction periods. Mexico City (Guerra 2013) and Lima recently added to their existing metro rail systems, whereas Fortaleza just completed its systems. Panama City’s first metro line is scheduled to open in January 2014. Now, Quito broke ground on the construction of its first underground metro line in February 2012. The daily progress is documented through twitter and live-video footage. Though Bogotá has a celebrated urban governance model (Gilbert 2006) anchored by the Transmilenio, the city too has aspirations to build a metro rail system.  If the BRT planning paradigm is successful, then why are Latin American cities returning to large underground transportation networks which are associated with time and cost overrun, and political and financial risk (Flybvjerg 2003)? I use Quito’s burgeoning metro line as an example to explore this shift in Latin American transit planning by highlighting the planning and policy rational behind metro rail development.

An urban mobility planning and policy paradigm underpinned by a metro rail?

Quito’s Trole bus system is a successful BRT system in Latin America and built in the late 1980s-1990s to satisfy the transportation needs of the expanding city. But nearly 20 years later, Quito’s BRT system moves 800,000 people a day and the Trolebus has slowly reached its operational capacity.[i] Simultaneously, Quito’s urban mobility plan established in 2009 set the precedent for the construction of a metro rail system in Quito to supplement the deteriorating Trolebus (EPMMOP, Plan Maestro de Movilidad 2009-2025).

The origins of the project have a political history. Four months before Mayor-elect Dr. Augusto Barrera announced his candidacy, he had aspirations for an urban mobility model based on an elevated train.[ii] But in 2009, Mayor Barrera won mayoral elections by campaigning with the future promise of urban mobility solutions and a metro rail.[iii] Also, Barrera is now campaigning for re-election with a cable-car project proposal. Quito’s shift to adopt a metro rail also comes at a time when President Rafael Correa has invested heavily in transportation solutions throughout the country. In addition to this political context, other municipalities have begun adopting mass-transit systems (Cuenca Tranvia). Guayaquil, the country’s most populous city, recently adopted the BRT system Metrovía.

A technical response to physical and population needs?

Quito’s population is currently near 2.5 million people and its population grew by 400,000 between 2001 and 2010.[iv] Quito’s urban form has evolved from a linear north-south city with a core-periphery urban model to a polycentric metropolitan region lead by twin processes of decentralization and democratization, and suburbanization. The city has extended to the north in areas such as Carcelén, Calderón, Pomasqui and San Antonio de Pichincha, whereas to the south it has sprawled past the city’s southern transportation terminal, Quitumbe. The city’s annual car growth is 9.2% (INEC 2010) and the urban mobility situation is currently one of Quito’s largest urban problems. 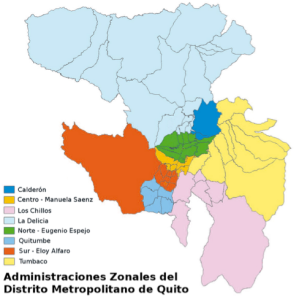 Census data between 2001-2010 reveal growth rates in the administrative zones of 79.8% in Calderón, 43.1% in Los Chillos, 67.9% in Quitumbe, 27.6% in La Delicia and 32.1% in Tumbaco (INEC 2010). These administrative zones represent the northern and southern extremities and valleys of Quito. The nuclear core of the city shows a much slower growth rate including administrative zones Manuela Sáenz with -2.9% (historic center), Eugenio Espejo with 5.5% and Eloy Alfaro with 4.2% (INEC 2010). These results reveal that the projected Metro route will not deal at all directly with this growth. Instead, the integrated system demonstrates the future buses and projected metro lines.

Furthermore, with the recent opening of Quito’s new international airport in Tababela, Quito will likely expand and further develop in the city’s supporting valleys. The first line of the metro will not connect the airport, valleys or far north of Quito. Instead, the route will run from north to south between the old airport, el Labrador, to the southern transit terminal Quitumbe, for a distance of 23 kilometers and will have 15 stations. It is designed to connect Quito’s hypercenter[i], which is defined between the trole bus stations from the north “La Y” to the south “Villaflora” and represents the most daily trips traveled. The Metro’s route is not linear like the Trolebus, instead its design concept is to connect the city east to west, which is the most difficult part about getting around Quito’s hypercenter. It will also connect to the existing transportation network[ii]. In addition, the city has a system of feeder buses that are supplementary to BRT lines. Buses and a bicycle infrastructure system supported by a public bicycle system, the BiciQ, are the other modes of formal public transit. From an institutional perspective, this project integrates into the existing transportation administration through the municipal public company, MetroQ, which is responsible for project planning, construction and execution.

Finally, transportation development in Quito is difficult because of topographic challenges. The city sits in the Guayllabamba river basin between the slopes of the Andes, with the active volcano Pichincha directly east. Because of the arduous landscape, technicians have reported that the underground metro rail is the best solution for Quito’s mobility needs assessment and responds to the topographic challenges of Quito.

Three main categories are communicated in order to promote the new metro rail that includes sustainability, a culture of mobility and global imagery of modernity.

Quito has many environmental concerns with climate change. The message behind the Metro has and continues to be on solving urban mobility and promoting a sustainable transportation model. As such, the Metro communicates these ideals in three ways: (1) social media[iii] (2) local radio and television and (3) the climate change workshops and impact report. Next, Felipe Correa and Harvard Design School published A Line in the Andes, which demonstrates the way Quito will be culturally connected with the Metro. Previously and historically the city is socio-spatially divided in three parts: the north, center and south. The book argues that the Metro aims to connect these three segments and promote a culture of metro or mobility for all citizens. This image is further communicated through the social impact report published by MetroQ and the unit dedicated to social responsibility and citizen participation. Currently, MetroQ has dedicated staff that follows a strict participatory planning model by working with the administrative zones and holds local assembly and community meetings to inform residents about the construction of the Metro. Another vital component to this unit’s work is the mass communication campaigns that are tent exhibits for citizens to go in and learn about the Metro and the future of Quito.

Finally, Quito’s source of official project motivations is established for tourism and international imagery of the modern city. In July 2013, Quito was awarded the “Oscar of Tourism” and voted the leading South American tourist destination.[i] The historic center of Quito has also been a UNESCO world heritage site since 1978.[ii] The project motivations are clearly skewed toward global tourism and modernity through several factors. For example, the current line extends into the historic center and has three stops. Technocrats argue that these stops will not cause damage to the patrimony of the historic center (this is supported by UNESCO). They also contend that to build a station in Quito’s historically dangerous and dirty transit terminal in the center, La Marin, would be too costly because of the topographic challenges.[iii] But when the project motivations are promoted to the public with notions of cleanliness, hopes and aspirations, which are tied to an Ecuadorean history, culture and international imagery (Siemiatycki 2006) it becomes impossible to build in an area known for delinquency and dirtiness. The Metro’s message for the Andean metropolis is clear.

Photo 2 Exhibit of the Metro, Photo by Julie Gamble

This article has woven together several factors that support the rational of Quito’s future Metro. What has been set aside is the financial cost that the city will undertake and its relationship with Metro Madrid in order to build the metro rail. This is purposely left out because it merits another post. Ultimately, what it has attempted to document is a context-specific rational of why Quito has chosen to construct a metro rail that comes from the perspective of the institutions involved. But, this project comes with much debate and citizen reaction. Citizens question the financial viability and technical rational of the Metro.[i] Citizen groups organized online, such as “Quito, Yo Me Apunto,” document the project’s shortcomings.

This blog post questions why cities are returning to expensive transportation investments if the technology and politics exist for innovative and cost efficient transit solutions for the poor. As cities compete to construct metro rails, the BRT paradigm may be shifting. An urban mobility paradigm conceptualizes why and how transportation ideas move and circulate, but leaves out how citizens participate in these decisions, how citizen expertise can shape better transportation experiences, and how the context of the city matters in the case of planning.

Ardila, G. A., & Massachusetts Institute of Technology. (2004). Transit planning in Curitiba and Bogotá: Roles in interaction, risk, and change.

[i] A blog dedicated to the analysis of Quito’s Metro http://metroparaquito.wordpress.com/

[i] Quito won the 2013 “Tourism Oscar” awarded by the World Travel Awards. Rio de Janeiro has won the award for the previous 9 years. http://www.andes.info.ec/en/turismo/tourism-oscar-awarded-quito-already-its-new-home.html

[ii] Quito was inscribed into the UNESCO World Heritage List in 1978. It was the second site ever inscribed.  http://www.worldheritagesite.org/sites/quito.html. Recently debate has sparked again over two stations that would cause damage to the heritage site: http://www.hoy.com.ec/noticias-ecuador/el-metro-es-una-amenaza-para-el-patrimonio-del-centro-593554.html

[iii] Despite the current upgrades that recently finished, these were the challenges that the municipality faced. http://www.hoy.com.ec/noticias-ecuador/la-marin-el-sector-mas-conflictivo-del-centro-entro-en-terapia-585675.html . For complete photos of the terminal’s upgrades see  http://www.telegrafo.com.ec/noticias/quito/item/concluye-rehabilitacion-de-una-estacion-en-la-marin.html

[ii] To see specific route information on all existing lines, visit http://www.trolebus.gob.ec/ . The existing transportation network consists of two BRT lines that traverse the city north to south (Metrobus-Q Trole and Metrobus-Q Ecovía), the Metrobus-Q Centro-Norte that runs from the historic center to the north, and two lines (Metrobus-Q Sur Oriental and Metrobus-Q Sur Occidental) that have several circuits that run between the south to the north of the city.

[i] This article documents the current status of the Trole bus and what the municipality’s plans are with the future. http://www.elcomercio.com/quito/trolebus-quito-transportepublico-licitacion-municipio-movilidad_0_1021097887.html

[ii] This interview documents how Mayor Barrera indicates that an elevated train will be the best solution for Quito, not the metro rail. http://www.ciudadaniainformada.com/noticias-elecciones-ecuador0/noticias-elecciones-ecuador/browse/57/ir_a/regional/article//augusto-barrera-implementara-un-plan-de-gestion-integral-para-quito.html and www.camaleon.com/clientes/augusto/Augusto_Barrera_entrevista.pdf

[iv] Population and housing census results were co-produced by INEC and Instituto de la Ciudad, The Metropolitan of Quito’s research institute. The bulletin with further information can be found here http://www.institutodelaciudad.com.ec/attachments/article/36/boletin1.pdf

Published by the Section Spatial Planning and Strategy TU Delft